We maintain a dynamic awards program. We single out members of our community – military, civilian, and future members – whose achievements have warranted individual recognition for their contribution to the legacy of Surface Warriors.

If you have any questions about a specific award or about our program in general please email awards@navysna.org.

Please submit all nominations electronically. If you are unable to submit due to connectivity issues, please use the email nomination form and attach a headshot photo of the nominee in uniform.
Back to List

Candidates must be paygrade E-3 through E-7, W-2 through W-4, or O-1 through O-4.
Deployments must be 120 days or longer away from home port (need not be continuous), during the current fiscal year 01 October- 30 September.
These disciplines are not limited to, but include the following: Deck Seamanship, Shiphandling, Weapons Control, Engineering, Maintenance, Damage Control, Navigation, Welldeck & Flightdeck performance, Fiscal Management, Leadership, Training, Command & Control, Communications, Food Service, & Administration.

The Commanding Officer of a deployed ship during the 12 months ending 30 September of this year can forward 2 nominees: their most exceptional Officer (O-1 through O-4, W-2 through W-4) and Enlisted (E-3 through E-7) selectee.
No, the criteria of this award was changed in 2016 and the requirement of an ISIC endorsement is no longer needed.
No, we prefer all nominations be sent electronically. Please do not send a duplicate in the mail. If you are unable to send electronically, award package can be mailed, but MUST be received by the deadline, 15 October to be considered.

Honoring those who most clearly exemplify the extraordinary qualities, vision & incisiveness of the nineteenth Chief of Naval Operations.

For those who demonstrate dynamic leadership, operational excellence, unselfish dedication to duty, visionary zeal and exemplary care for personnel under his or her direction.

Please submit all nominations electronically. If you are unable to submit due to connectivity issues, please use the email nomination form and attach a headshot photo of the nominee in uniform.
Back to List

Nominations should outline leadership qualities and stress visionary qualities. Particularly on how an individual contributed both toward the increased effectiveness of his or her organization, & how the welfare of its people, should be delineated.
If multiple submissions from a command are received, we may require the CO to rank the nominees. If you have any questions please email awards@navysna.org.
The award will be presented to active duty Navy Members in pay grade E-3 through O-4 who best exemplifies the ideals of Admiral Zumwalt.

This award was initiated to showcase the professional activities & lives of the Surface Warfare Community. Featuring images that represent their contribution in the following areas; naval warfare; archival material, & educating the citizens of the United States regarding surface warfare department & its achievements. 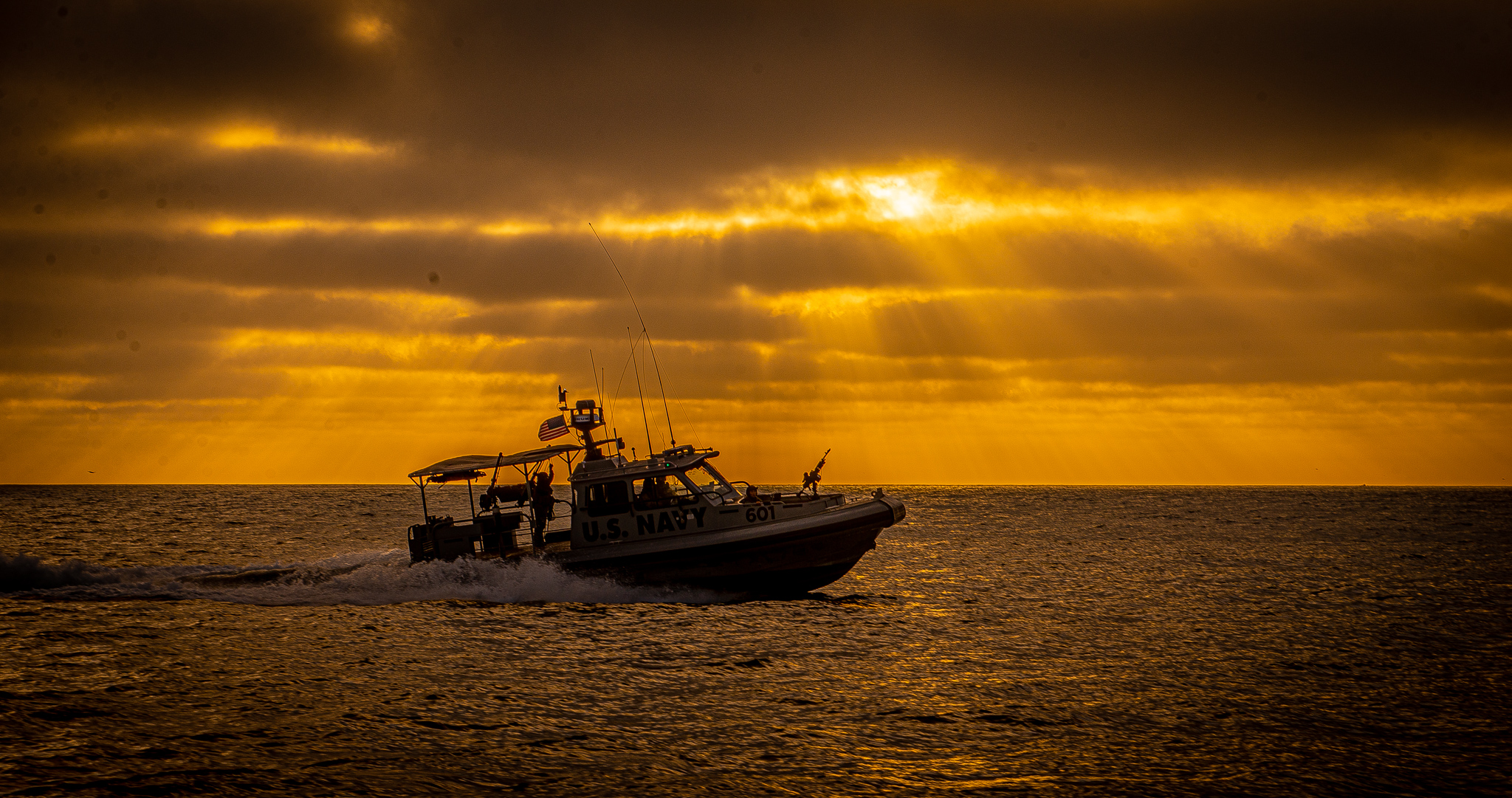 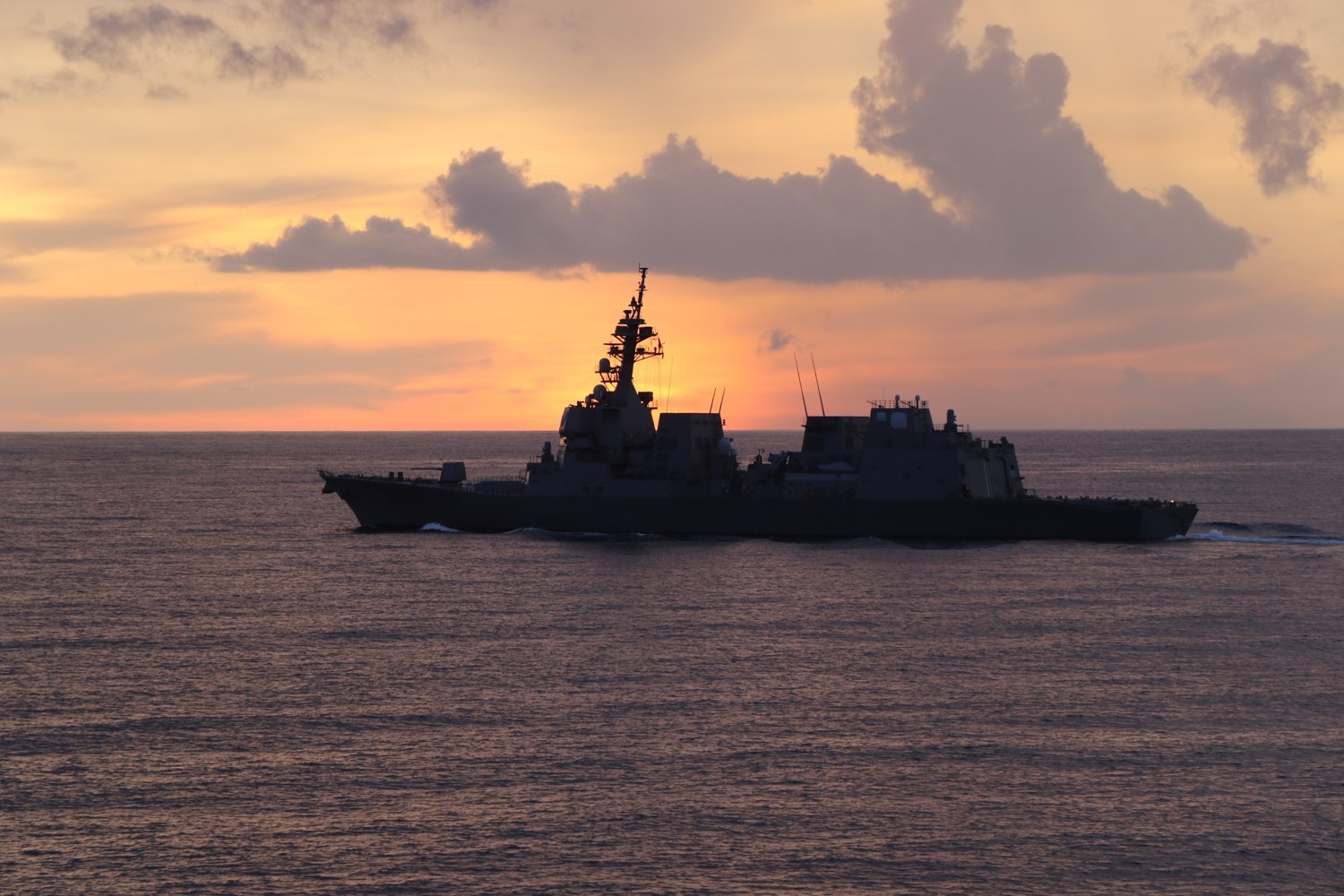 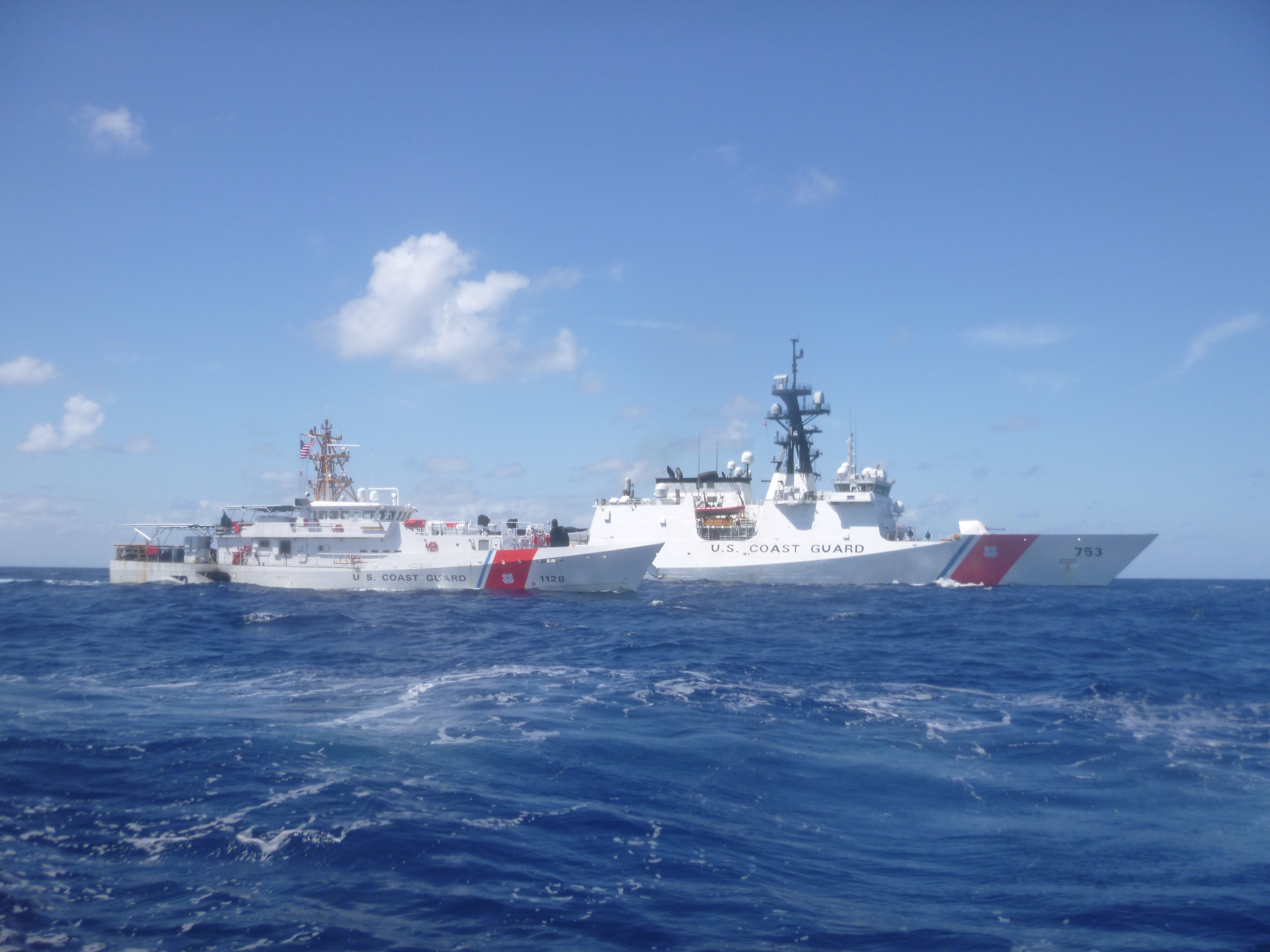 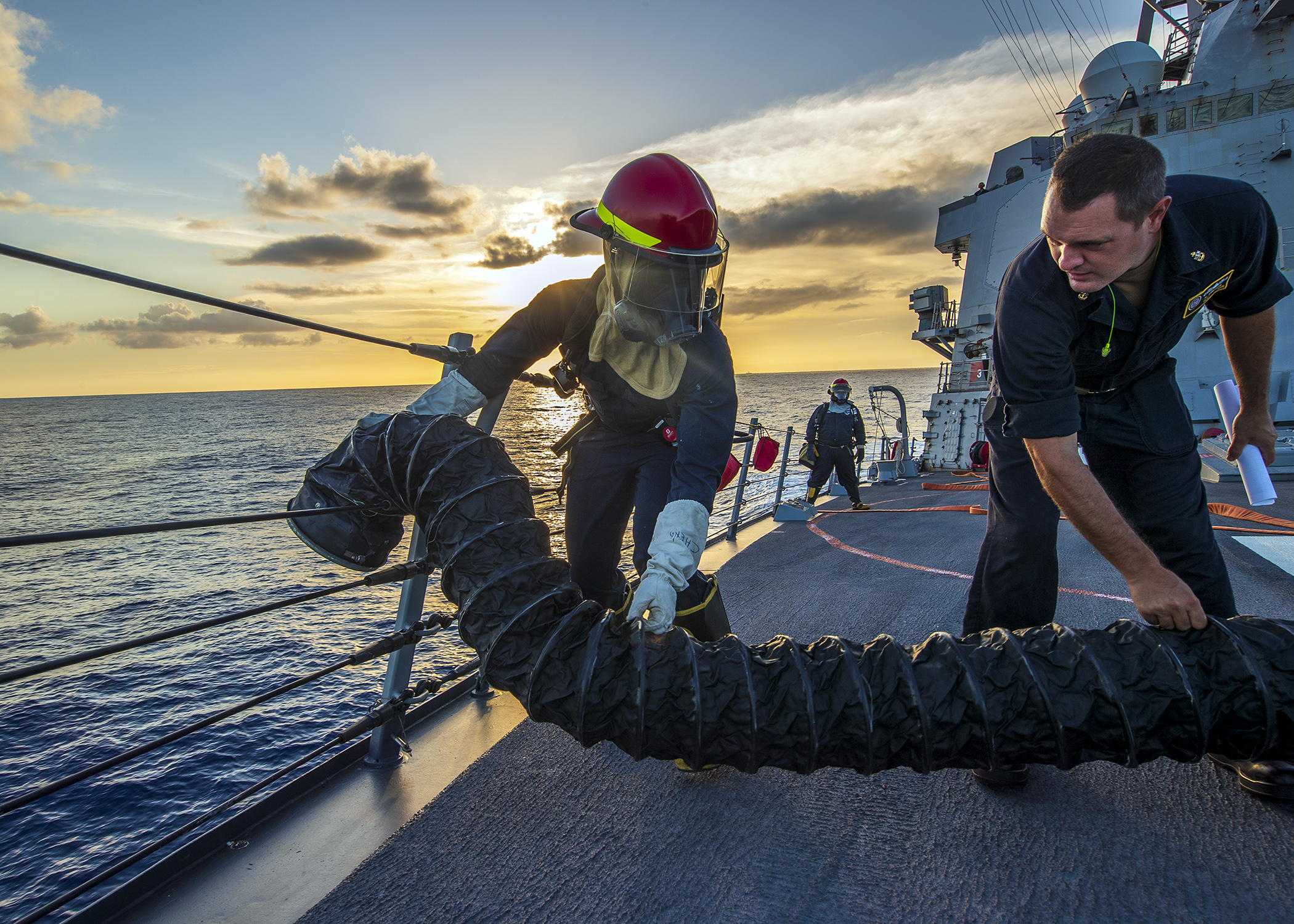 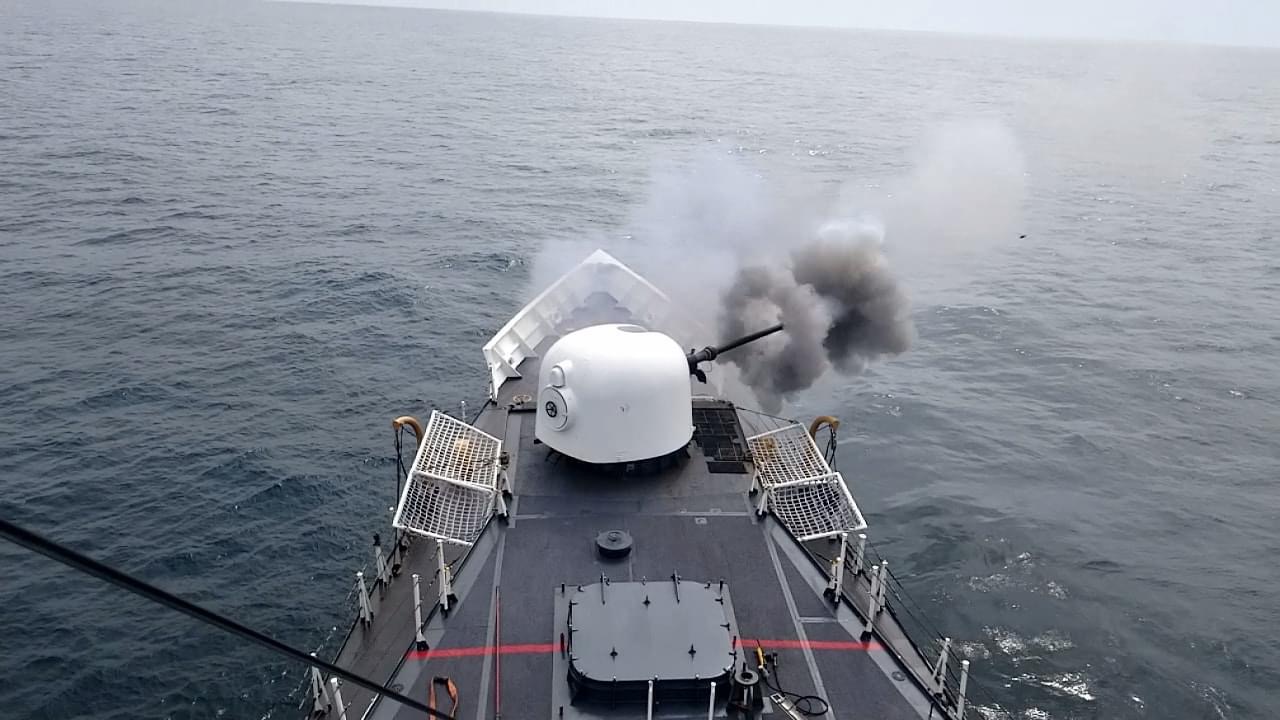 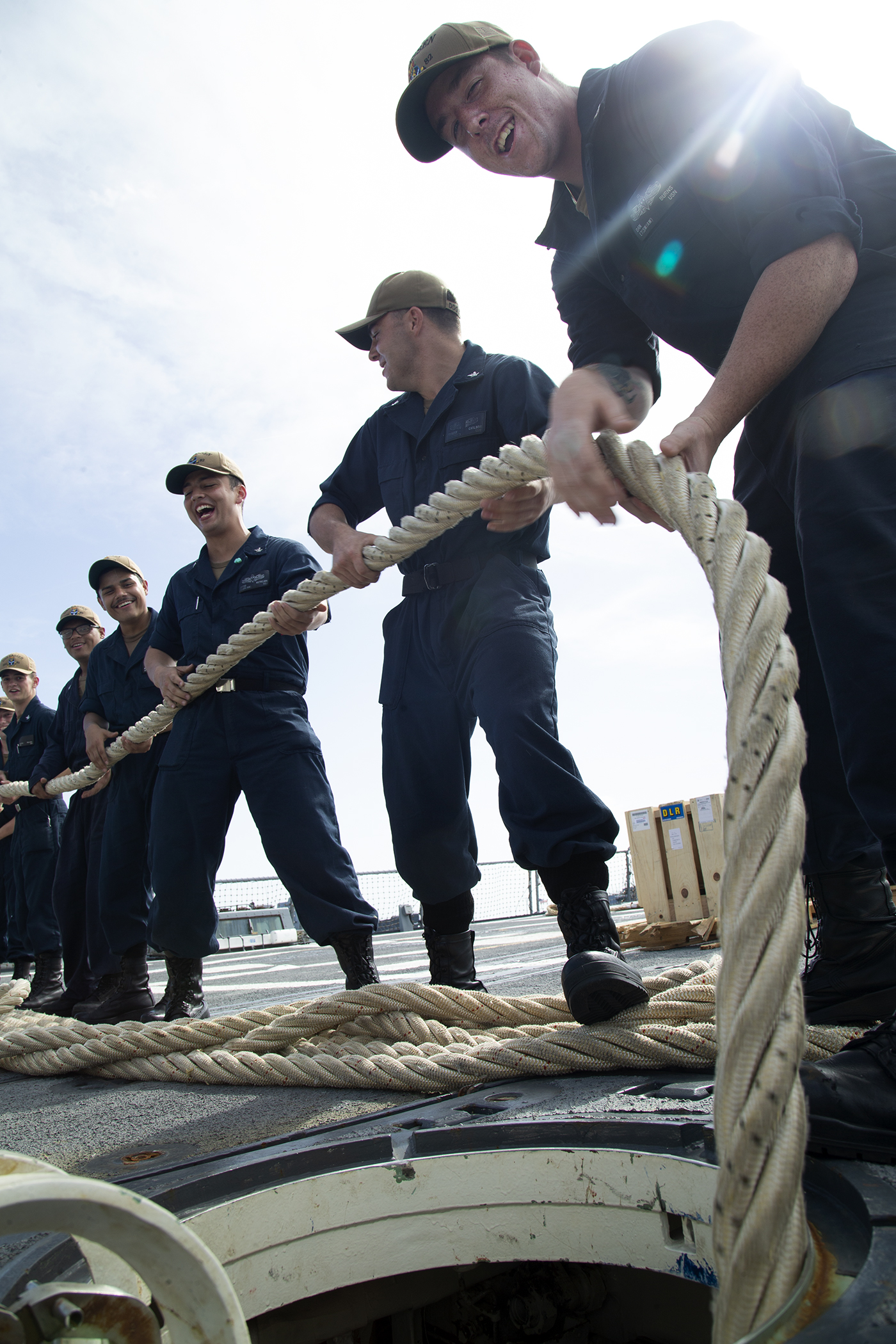 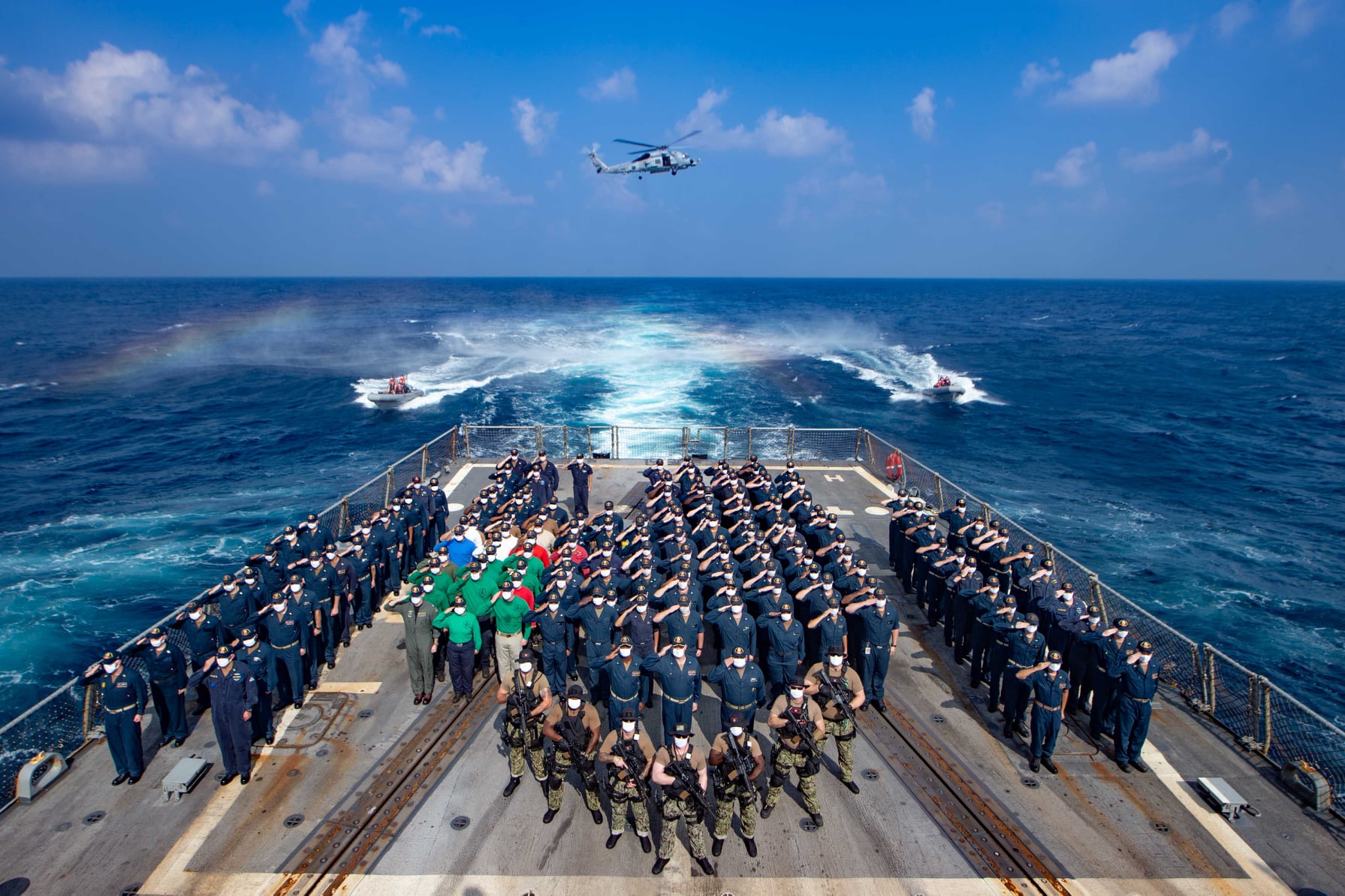 The Crew of USS Winston S. Churchill poses with one of her embarked MH-60R Helicopters as well as her two Rigid Hull Inflatable Boats, whose wakes, combined with that of the ship, form the shape of an anchor. Anchored in Success! 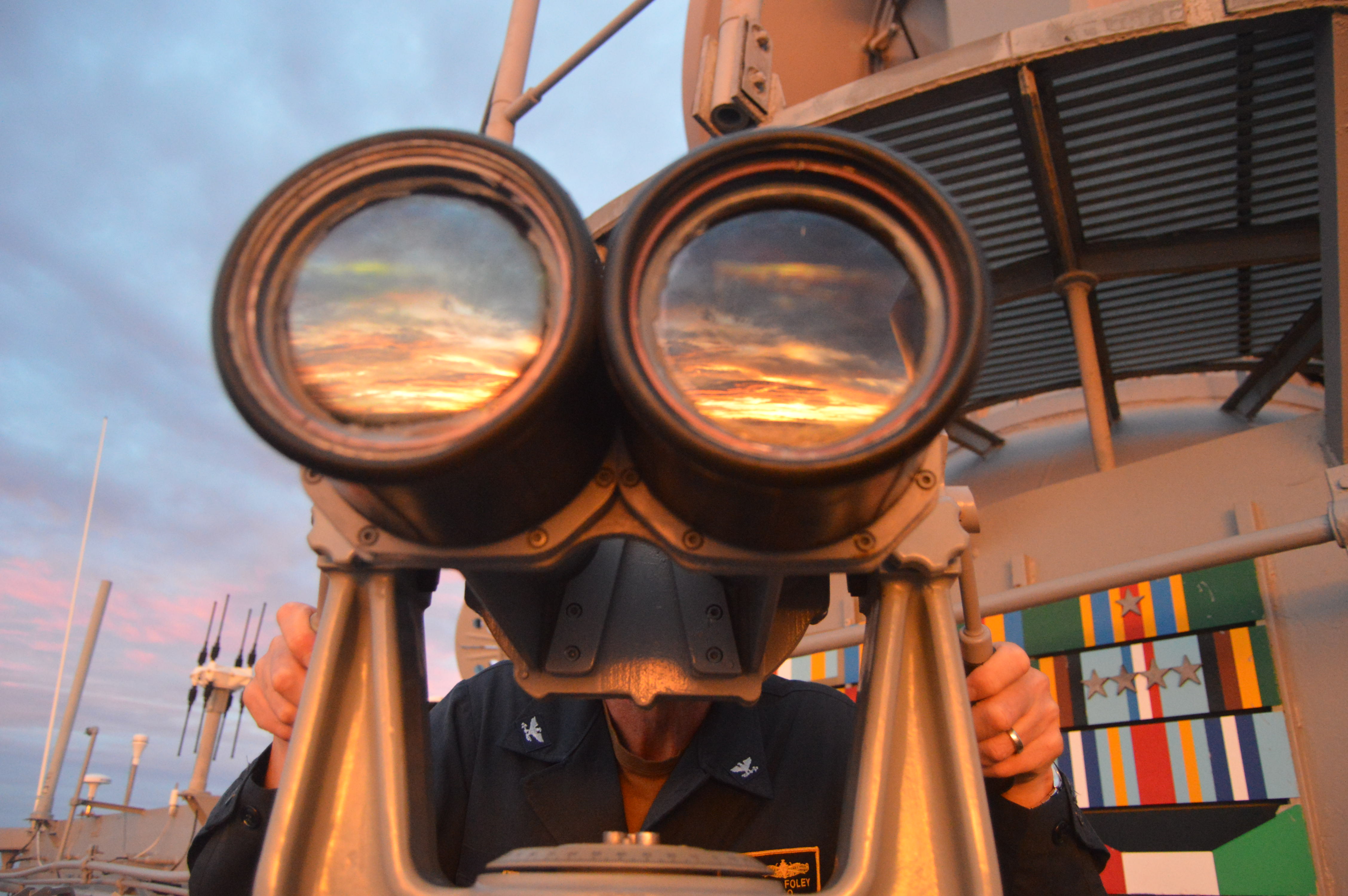 Captain Steve Foley, Commanding Officer USS Lake Champlain, looks through the big eyes at the sunset during a deployment in 7th Fleet. 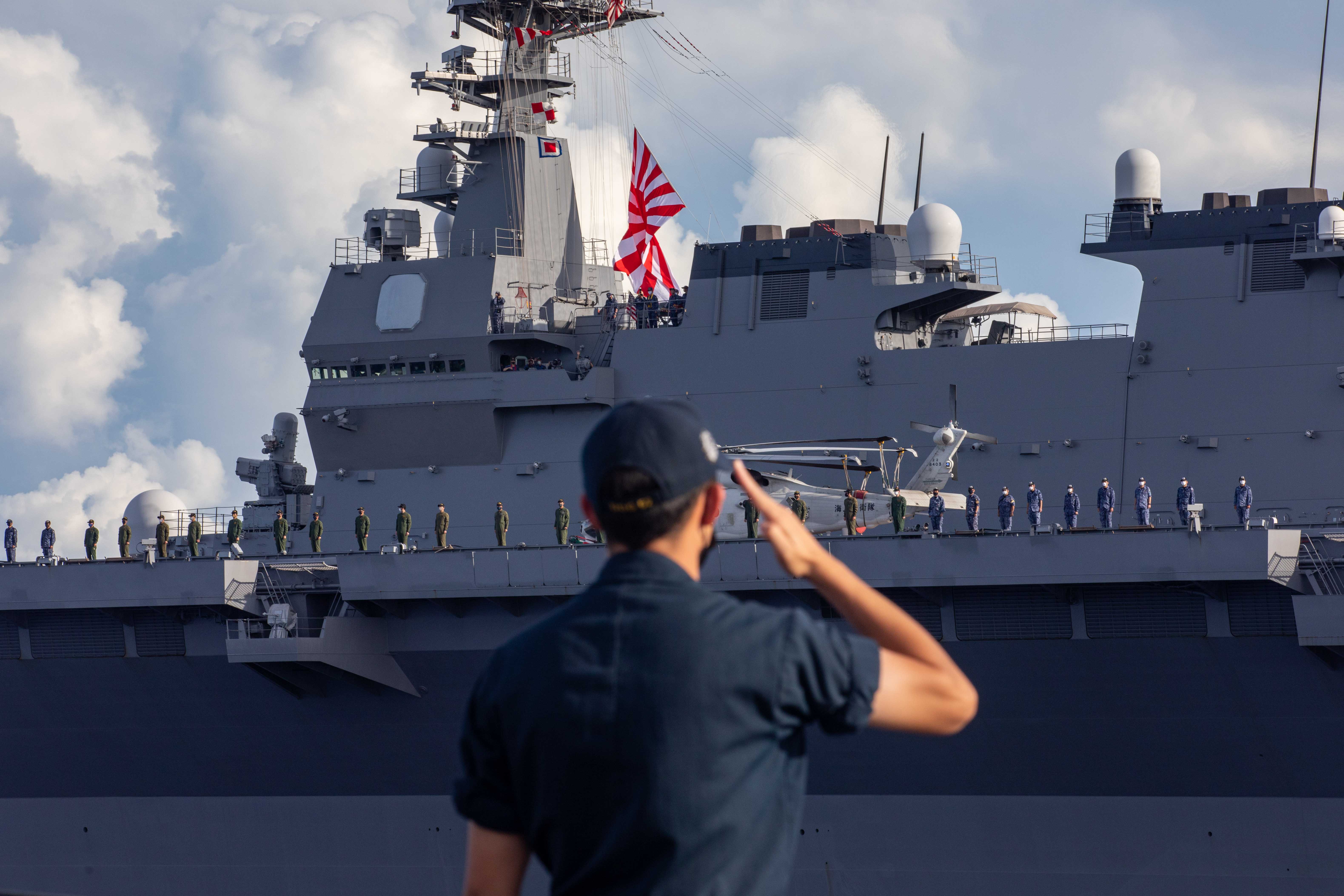 Digital images must be at least 2100 pixels wide and 300 DPI. Selected images will be made into posters for display at the National Symposium. Resolution must be high enough to support this size increase.
Select Non-Members include active duty, reserve, retired military in the U.S. Uniform Services, or a DoD employee/contractor.

There are three winners in each category and one is designated as the Grand Prize Winner.

All photos become the property of the Surface Navy Association for exclusive use until ninety days after the SNA National Symposium. Prize photos will be submitted for possible publication in Surface Warfare Magazine. The winning photographs will be displayed appropriately at the annual SNA Symposium.

In consideration of the awards presented to the winning images, photographers grant exclusive use of their winning images to SNA for use in their various media and possibly Surface Warfare Magazine, starting from selection as winner until 90 days after the National Symposium where the award is presented. Photographers retain ownership and copyright of their submitted images however, grants all rights in perpetuity to SNA to reproduce, display, publish, distribute, create derivative works of submissions while crediting the photographer (where feasible). SNA use of any submitted images not winning awards will be at the discretion of SNA and subject to arrangements with the respective photographers.

Digital images must be at least 2100 pixels wide and 300 DPI. Selected images will be made into posters for display at the National Symposium. Resolution must be high enough to support this size increase.
Back to List

Chapters must meet qualifying criteria in their chapter size category to earn a Chapter Excellence designation.
Back to List

This award is presented to all new Surface Command Master Chiefs & Senior Chiefs, who are graduating from the Senior Enlisted Academy in Newport RI.

A Command Badge is given to awardees.
Back to List

This award recognizes the best professional article in any publication addressing the Surface Navy or Surface Warfare issues.

The article must be published during the preceding year, beginning on 15 October.

A $1,000 check is awarded. This check is jointly sponsored by SNA & USNI ($500 each). Winner will receive a crystal commemorative award. Any Honorable Mention(s) will receive a framed certificate of recognition.

This award recognizes a Chief Petty Officer for a consistent long-term demonstration of inspirational leadership, exceptional seamanship and operational excellence in surface warfare skills and exemplary performance in organization and management, mission accomplishment, motivation and leadership, and mentoring.  The selection process starts each year with a message from COMNAVSURFOR in March requesting submissions and outlining selection criteria, timelines, etc. Final selection occurs in July. The award presentation is traditionally held the fourth week of August onboard USS CONSTITUTION underway in Boston as the culmination of a week of Heritage training for CPO Selectees.

This award is a writing contest designed to engage NJROTC & CGJROTC cadets. This year’s essay prompt will focus on the Surface Navy Association’s Hall of Fame.

Essays will be accepted between November 1 – February 15 of the current school year. SNA judging will take place between 15 February and 1 March. Winners will be announced in April. Questions, email awards@navysna.org.

Select one of the individuals in the SURFACE WARFARE HALL OF FAME who interests and inspires you. Discuss what we could learn from their example and how their experiences inspire you. Your essay should cover their heroic act or significant contribution to surface warfare as well as the obstacles or risks the individual faced. Please watch the induction video and conduct additional outside research to further supplement your essay, describing why their contribution was significant. Please cite sources used.

Please use the above buttons to view Hall of Fame Inductees and to submit student's essay.
Back to List
Back to List

Award checks are presented at the Unit level during Spring Award ceremonies by SNA Representative if available.


Recruiter of the Year Grant


Shiphandler of the Year Award

Surface Warfare professionals have always prided themselves on expert handling of their ships. Since the early days of sailing ships, an Officer of the Deck or Captain of a ship develops & maintains a reputation as a professional seafarer in large part by the skilled handling of his or her ship in all types of weather, formation maneuvers, approaches to the anchorage or pier, keeping to the channels & fairways in ports & harbors & more recently, taking & maintaining position alongside in underway replenishment. Crisp, direct & safe handling of the ship are marks of the expert. The purpose of this award is to recognize Surface Warfare professionals that excel in the art of naval shiphandling.

The winner of the SURFOR shiphandling competition will be recognized by this award.

SNA will not take part in the selection of the eventual winner of the competition.

The winner will be presented with the Shiphandler Award that includes an engraved plaque & invited to the National SNA Symposium to participate in the Awards Luncheon & Banquet. The runner-up will receive a certificate of recognition.

This award is awarded to Surface Navy Association members, dependents, and retirees whose community-related activities go 'above and beyond' as well as promoting the Surface Navy.

Selected by the NJROTC or CGJROTC unit commander. One awardee for each category may be selected annually from each unit. The selections will be presented to the Surface Navy Association no later than June 1st.

Please submit nominations at least 2 weeks prior to award ceremony. If you have any questions please email, dgarrynavysna@aol.com. DO NOT EMAIL OR MAIL NOMINATIONS.

A Certificate of Recognition and a ribbon from Surface Navy Association will be presented by the Unit Commander with the participation of the local SNA Chapter.

A Certificate of Recognition and a medal from Surface Navy Association will be presented by the Unit Commander with the participation of the local SNA Chapter.


Surface Sailors of the Year Award


Surface Warfare Officer of the Year

To creatively promote the values of the Surface Navy Association and to actively engage the Surface fleet and SNA members to choreograph and produce a Surface Warfare “spirit spot” video, showcasing Sailor’s lives in the Surface Navy and Coast Guard (at sea and ashore) or supporting surface warfare in industry.

Although SNA membership is encouraged, it is not required. Video must meet the below criteria.

Highlights from CGC RESOLUTE's recent patrols, countering the threat of narcotics and illegal migration voyages in the Central Caribbean. 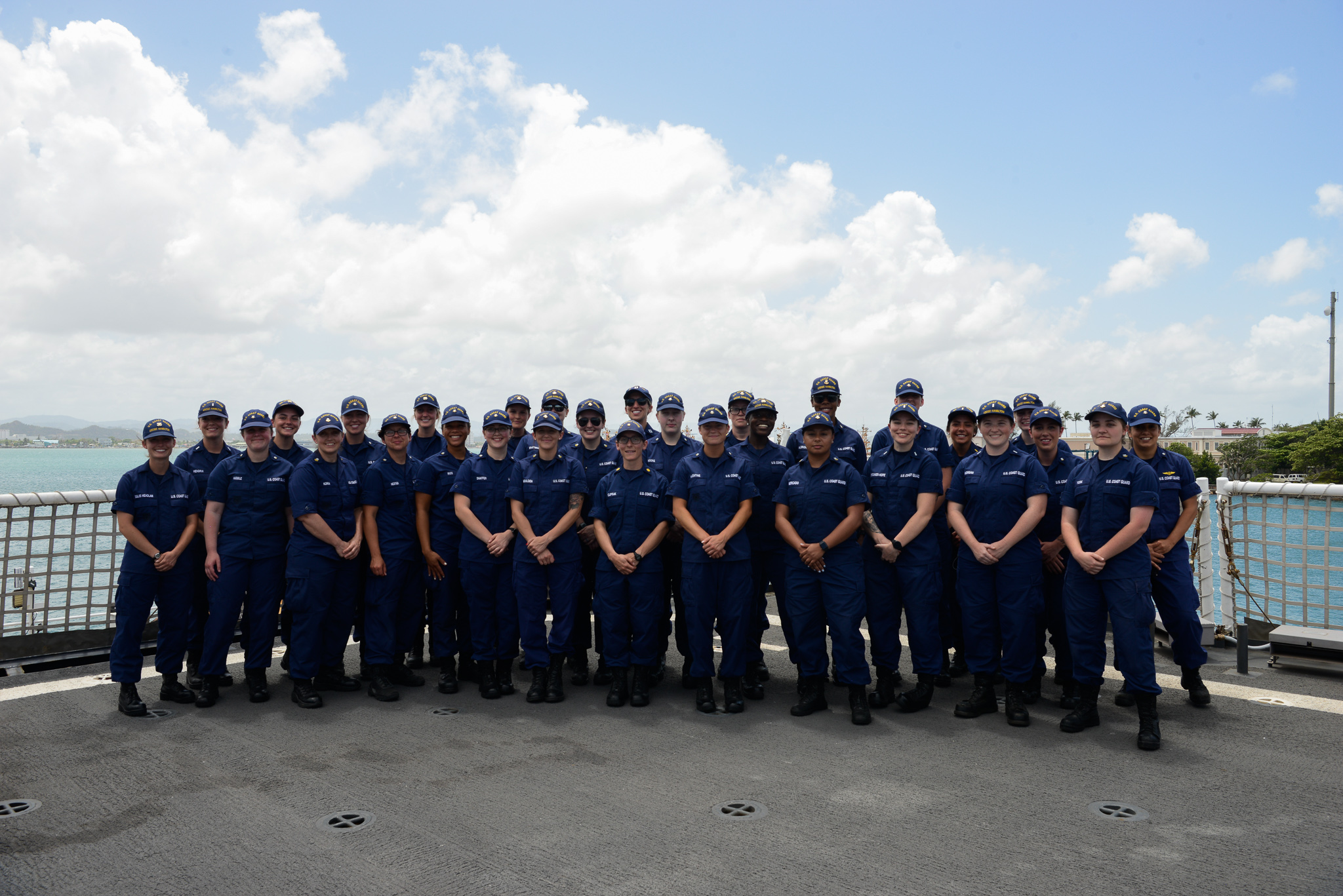 CGC HAMILTON demonstrates the cutter’s operability and mission readiness through the impact women have on the unit and the Coast Guard. These roles range across all departments such as, Engineering, Operations, Combat Systems and Support. 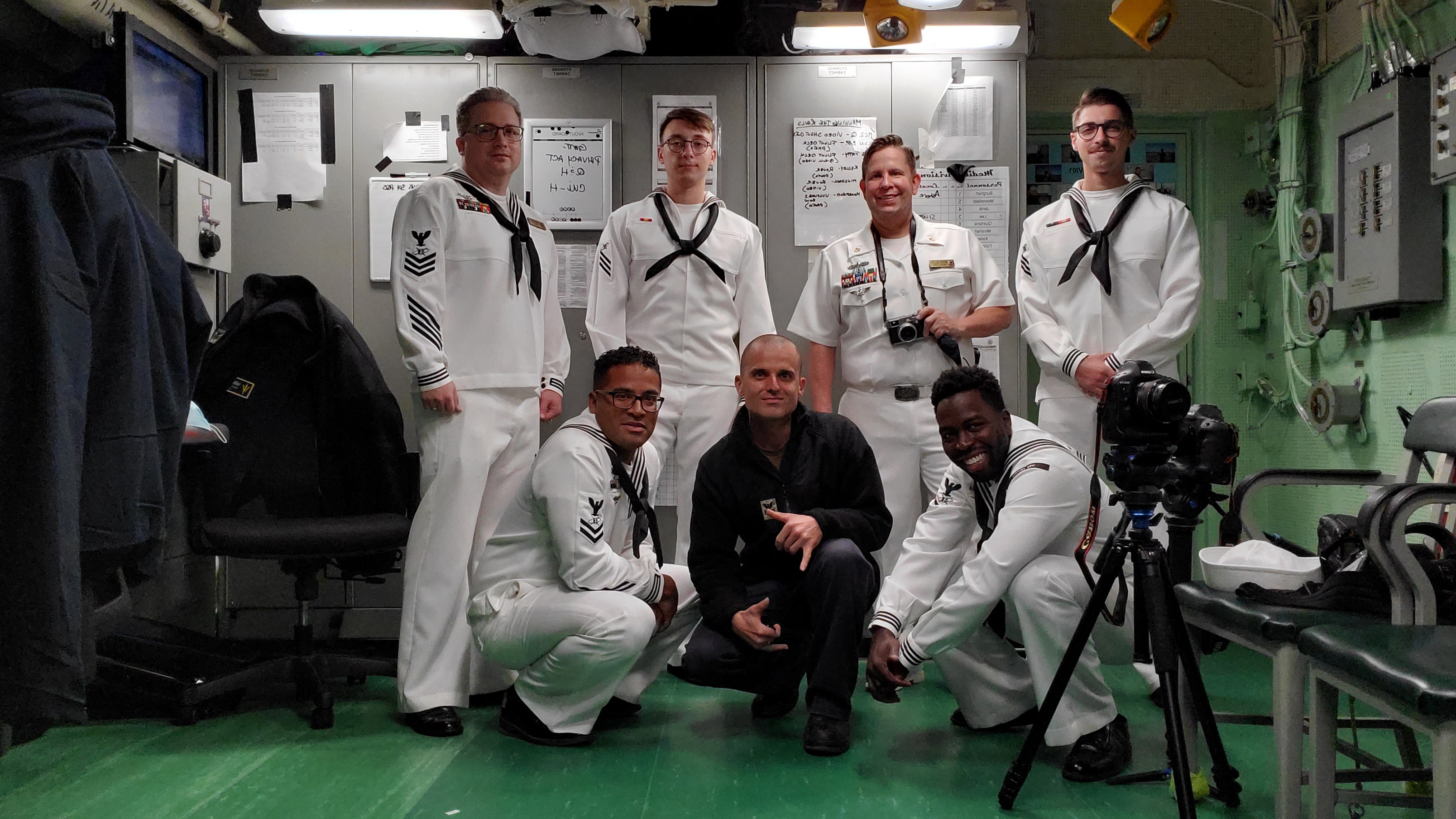 USS TRIPOLI highlights events from a busy year in the fleet.

Videos will be submitted by 01 October online to National and the Awards Committee will vote based on the above criteria. Videos will be judged based on merit for creativity, artistic quality, and portraying a positive image of surface warfare. Videos will be showcased at the SNA Symposium.